Skip to content
Home/Uncategorized/The Most Successful Empowerment Course in the World?
Previous Next

The Most Successful Empowerment Course in the World? 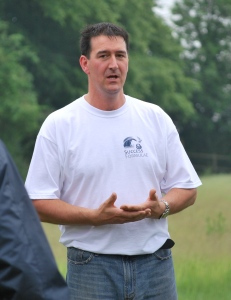 The Most Successful Empowerment Course in the World?

A bold statement?  Perhaps. But what is “EMPOWERMENT” anyway?

Empowerment is defined as “having the strength and confidence to act on one’s own initiative”, and many of us do.

However, many people are afraid of things that they become accustomed to fearing, because of upbringing, experiences, or simply because of a lifetime of withdrawing from certain challenges or obstacles.

Most children are told ‘no’ over 90% of the time as they grow up, and so it is no surprise that as adults we become risk averse and lack confidence to try new things, and even have fears.  Sometimes fears of the mundane.

Psychologists assert that we only have two innate fears, that of loud noises, and that of heights, and that everything else is either taught or learned, either from others or from our own experiences.

Steve Consalvez, has studied empowerment for over 25 years, and especially studied those people who have created an industry around it, to discover what it was that makes people think better about their own state of confidence.

Steve discovered even as a teenager that confidence was worth money.  By the time he was 15 he had earned money from three small enterprises, and was a Managing Director of a Young Enterprise Company and was already enjoying public speaking, representing this school in the regional championships.

Steve always had an unusual way of looking at life.  However, in discovering NLP, and Unlimited Power, Steve then went to look at where all the information originated from.  Before bringing it to the UK, he wanted to study the course, and where it came from.

In doing so, he discovered that two of the world’s biggest personalities in the field, Anthony Robbins, and fellow American Harv Eker, both became the giants they did after going through a four day course, hosted by another American, a relatively unknown man called Bruce (Tolly) Burkan.

Tolly’s course evolved over a number of years and involved taking each student, not through some regimented or scripted method devised by him that prescribed what it might be that they feared, but instead involved them engaging in a number of generally accepted fear-invoking exercises.

For four days, each of around 14 hours, the participants voluntarily accept new and greater challenges, each one harder than the next, until at the end of day 4, they emerge, empowered.

Steve had already been a part of the team that had brought Tony Robbins to the UK, and so he tried to bring Tolly.  Unfortunately though, Tolly couldn’t travel due to historical spinal injuries, so unwilling to wait, Steve took the daring step of approaching The Firewalking institute, to allow him to learn and train to become a Master Trainer, and bring the seminar to the UK.

Steve is the only Master Firewalking Instructor in the UK, and when you look at the long list of celebrities and personalities that want to do this course, and the results that he gets, you can see why.

But more than that.  On the course, the focus is that you ‘BECOME’ empowered, by teaching you the how of being empowered and giving you the choice, of teaching, and passing on this state of excellence and confidence to others, to influence, inspire and motivate.

Tony Robbins has apparently led more than five million people across a firewalk since learning the technique and seminar from Burkan, and now Steve and some fellow trainers are now bringing this same course to a new generation of Tony Robbins.

The course is unique.  There are many physical activities, as there are psychological activities, and each participant accepts that every activity is undertaken by them voluntarily.  They are not forced or coerced, but after 4 days, every participant has had a raft of new experiences to reconcile with, the ones from the past.  And all of their new experiences PROVE that they are capable of much more than they thought, and that things that they were fearful of in the past, are a small and insignificant component of who they were replaced by a new EMPOWERED self.

Here are what a few of our past delegates have said:

What people get from The Empowerment Intensive and Firewalk Instructor Training is an array of challenging experiences, stacked one upon another, in such a way, that people realise the possibilities of their potential, in just 4 days.  At the end of 4 days, they have a sense of confidence and personal empowerment, that nothing else, in the world can provide from a course.

Many of our delegates are just so awed by the experience, that when they leave, they immediately change their lives and make decisions about what they will do from here on.  Many attendees, write books, turn to teaching, or simply just go ahead and do all the things they always really wanted.

I want people to understand just how awesome they are, and just how ludicrous some of the feelings they have attached to mundane things that they don’t need to have.  It’s not that people will go away and succeed every time, it’s that life throws you opportunities, not obstacles, and sometimes you have to grab and sometimes you have to let go.  We just help people let go of the things that they realise are pathetic and unimportant, and help them to become determined and confident.

Anyone who know what Tony Robbins does, as I do, and would like a piece of what Tony received, needs to come on the course.  This course has a higher long-term impact rate than other courses out there, and most who come on that have done Tony’s courses agree-it is life-changing.

When I left my own Empowerment Intensive in 2006, I decided that I would leave my very well paid corporate job, move house, get trained, build a training school and bring this course to the UK, for the first time in 33 years.

Now, we are changing the lives of people all over Europe, and in the UK, and helping people realise just how awesome they are and just how much more juice they can get from their life, and how they can impact the lives of others.

About the Author: Steve Consalvez